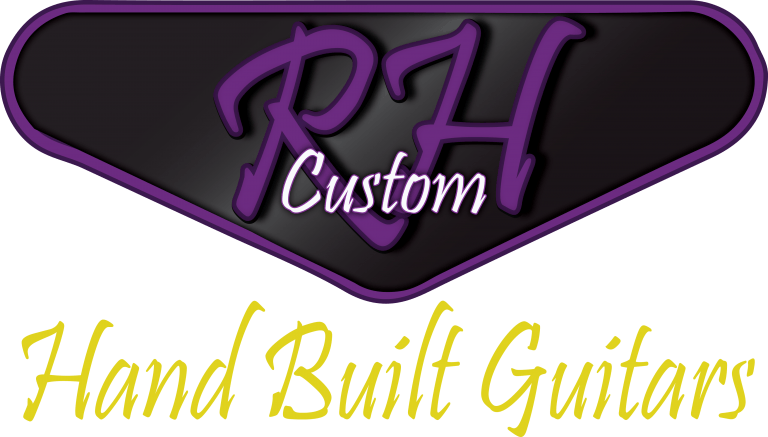 Call Us!
Email Us!
Menu 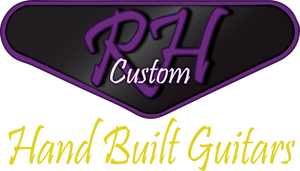 At RH Custom Guitars, we are thankful and fortunate to have such wonderful customers and musicians willing to provide us with Testimonials and Reviews of our custom guitars.

I had heard of Rick and his guitars from a mutual friend, Mark Kendall.

My first opportunity to see, touch and play one was at the SoCal Guitar Show in June 2022.

After admiring the hundreds (perhaps thousands) of vintage instruments and not seeing anything that really caught my eye, my wife and I were about to leave when I saw the RH Custom booth.

I walked in and was immediately impressed with the visual appeal of the instruments on display. Immediately drawn to a lovely red guitar (named Little Wing), I asked if I could pick it up and hold it. Rick obliged and offered for me to plug it in to his amp.

The feel and finish of the instrument was absolutely superb. The hardware, a mix of chrome and gold, was high-end and striking.

I heard my wife tell Rick, “He’s leaving with that guitar, I can see it in his eyes.”

Well, once I plugged it in and began playing it, I was blown away. The fretwork (stainless steel frets) is perfect, the intonation spot-on, the playability of the neck is masterful.

And then, Rick says "both pots are push/pull, you can independently split each pickup."

Really? Well, that simply made this the most versatile guitar that I personally have ever played.

Short story: my wife was correct! I did leave with that guitar and happily joined the RH Custom Guitars family.

My band plays a very eclectic setlist that requires me to have at least 2, normally 3 guitars. With the versatility provided by independently splitting each pickup, I can play the entire setlist with this guitar.

The neck is so stable that for drop D, I just down tune the low E string and all other strings remain in tune … it’s literally faster than changing guitars.

I began playing guitar in the early 80s and have amassed a rather large and somewhat varied collection of instruments.

I own Gibsons, Fenders, PRS, Knaggs, Suhrs, Kramers, ESPs, Buddy Blazes, Gretsch, Ibanez, Carvins, Peavy, Brian Moore and Walla Walla … and I would put this instrument up against anything I ever played.

If you play guitar and haven’t tried an RH Custom Guitar, you have no idea what you are missing! 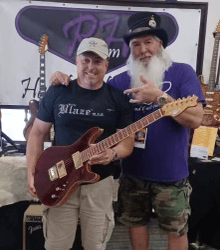 I don't have access to my gear but I bought a headphone amp recorder that I can plug in and play. I'm so damn excited I can't tell you.There's unlimited tones with the pickup configuration and it sounds great! Everything's perfect,I notice so many details that you put into the bass. I love perfection and I've gone over this baby with a fine tooth comb,It's perfect my friend! Thanks again for your attention and talent to detail in every way! Your the best my friend! 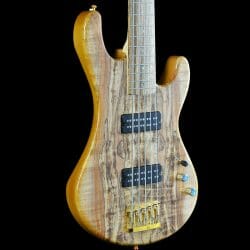 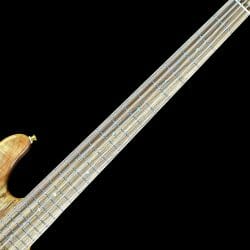 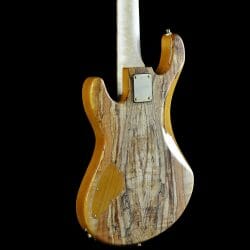 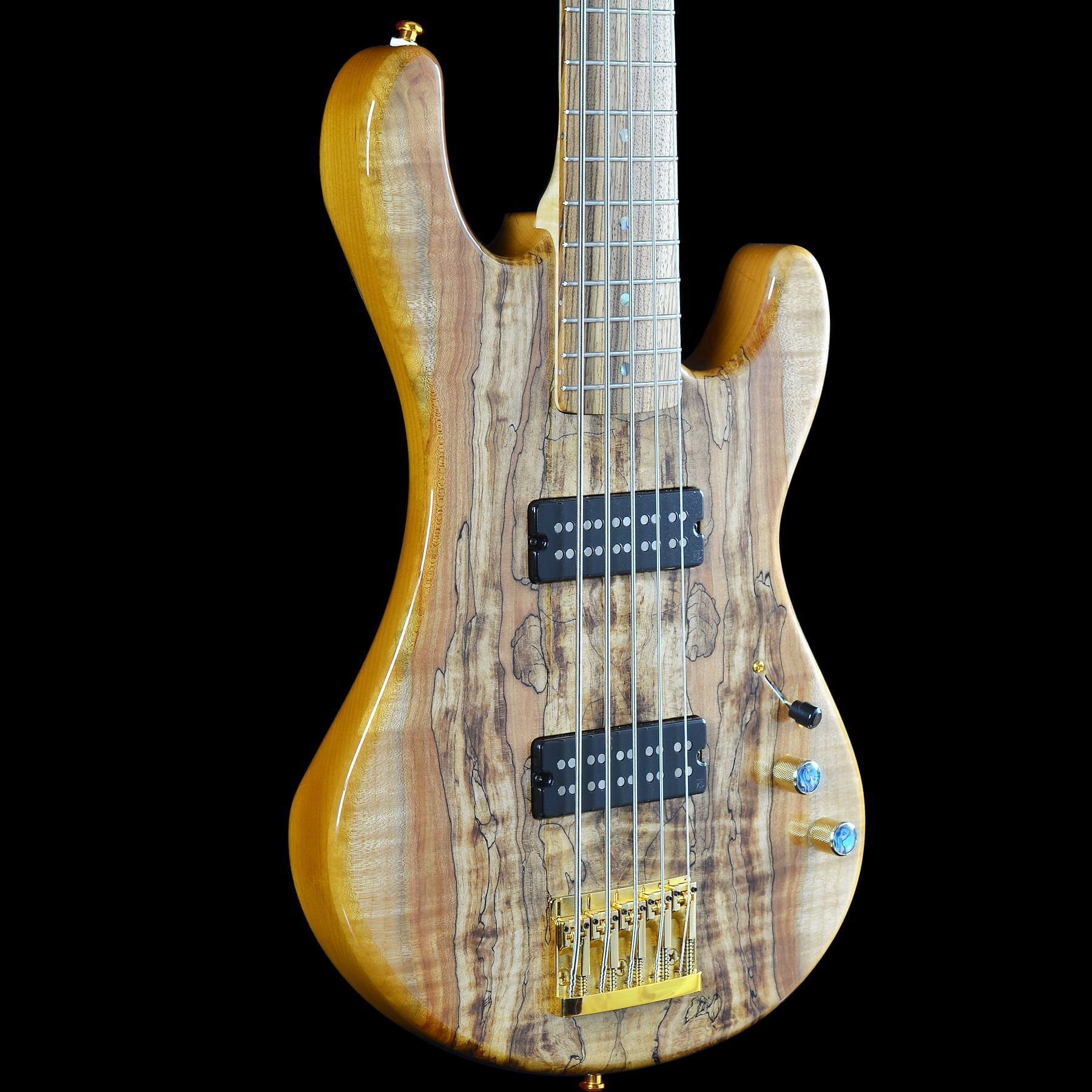 Jim BurnsProfessional Bass Player
From the moment I first laid eyes on it, the beauty, craftsmanship, tone,  and 'wow factor' this guitar delivers reeled me in. 'Must own' are the two words that best sum up my experience with this amazing instrument. RH Custom Guitars are crafted with the care and precision that truly makes them one of a kind!

For more of Doug's opinion while playing his the quilted dream check out this YouTube video.

If you are unaware of Doug's impact as a guitarist and the respect he has earned within the music industry. His career includes a disc on Steve Vai’s Favored Nations label, session work on the famed Guitar Hero video game franchise, and over 1,000,000 YouTube plays as a gear demonstrator for brands including Audio-Technica, Brainworx, Ernie Ball Music Man, Gretsch, Ibanez Line 6, Orange Amps, Roswell Pro Audio, Tech 21, and Universal Audio.

In his teens, Doppler studied with guitar legend Joe Satriani, and was chosen by ‘Satch’ to take over his teaching spot in Berkeley, CA when he hit the big time. Doug is a passionate music educator and teaches at the guitar camps for Satriani, Steve Vai, and Dream Theater’s John Petrucci.

Doppler also serves as the Editorial Director for Worship Musician magazine, which reaches nearly 1,000,000 inboxes via the digital marketing collective that makes up their distribution. In addition to hosting their House of Worship TEC Tracks, NAMM recently asked Doppler to host a pair of church production webinars as well. Every week Doppler also hosts a pair of streaming shows, Doppler’s Gear Garage and The Worship Guitar Show.

The above biography was originally published at https://www.dougdoppler.info/about 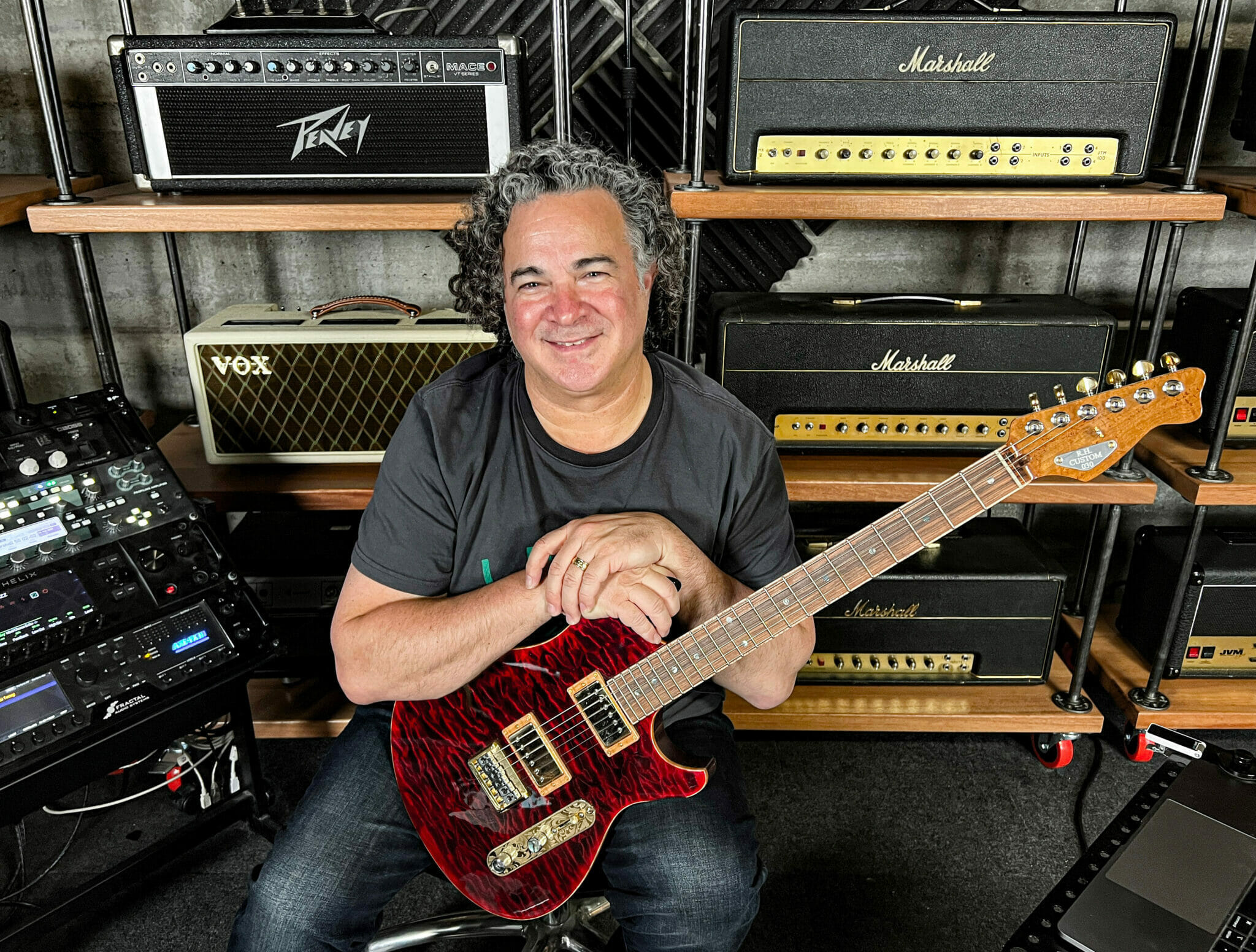 Doug Doppler | ReviewMusician, Gear Demonstrator, Guitar Educator, Editorial Director for Worship Magazine
I am a gigging musician in Southern California. I met Rick years back when he asked me to demo one of his Tele style guitars.

Typically I am not a fan of Teles, but I was blown away by this piece! It was set up to perfection, the action allowed for that smoothness of playing while being perfectly intimate.

Beyond being a fine instrument, Rick demonstrates a level of artistry that is unparalleled. He has a deep understanding of the woods how they resonate as well as how to magnify there natural beauty.

You won’t find a level of care, craftsmanship and creativity beyond a RH Custom Guitar! 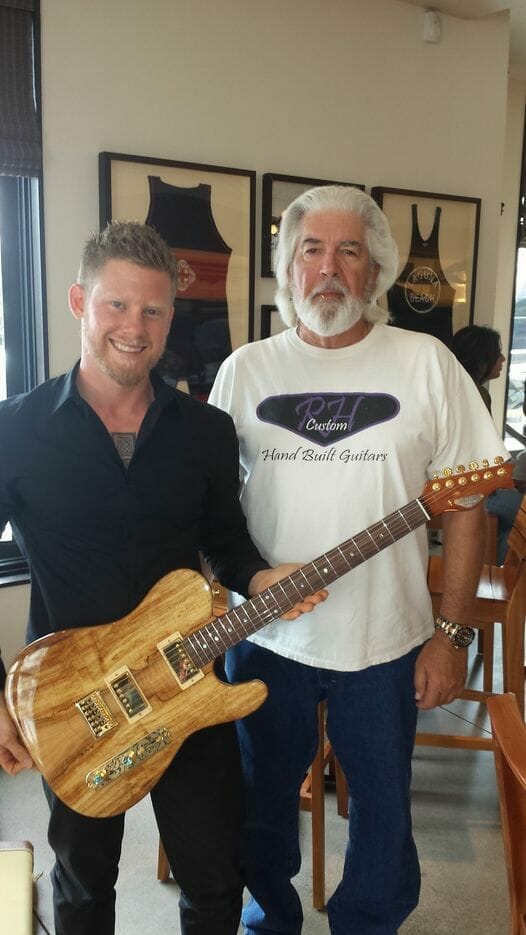 Brandon Wildish | ReviewMusician
I was recently given the honor of doing this demo for RH Custom Guitars. Rick Harrison builds high end guitars, and no two are alike.

Each and every one is a unique visual and musical masterpiece. The quality, sound, playability, and artistic craftsmanship of these guitars is second to none!!

Check out the whole line at RHCustomGuitars.com, or visit RH Custom Guitars on YouTube. 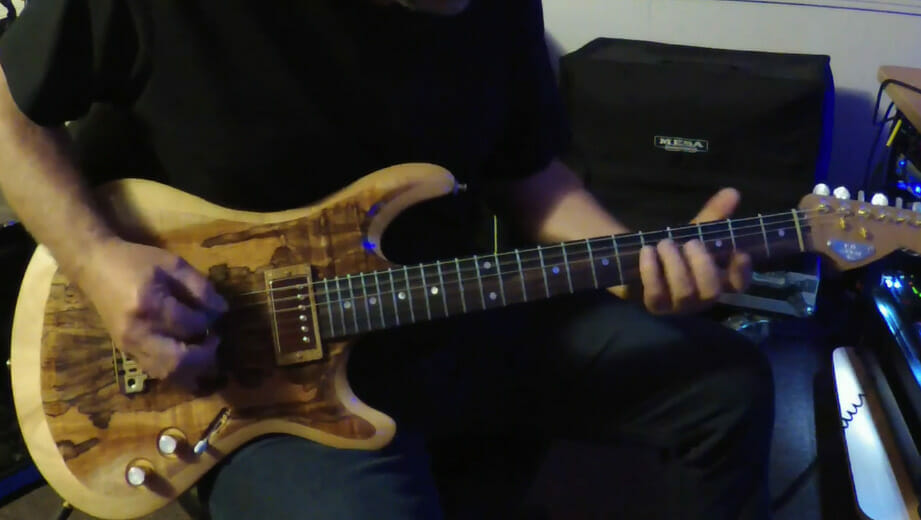 Steve Gauronski | ReviewMusician
I play my RH Custom Guitar when I can because I realize it’s the best electric guitar I have ever had. 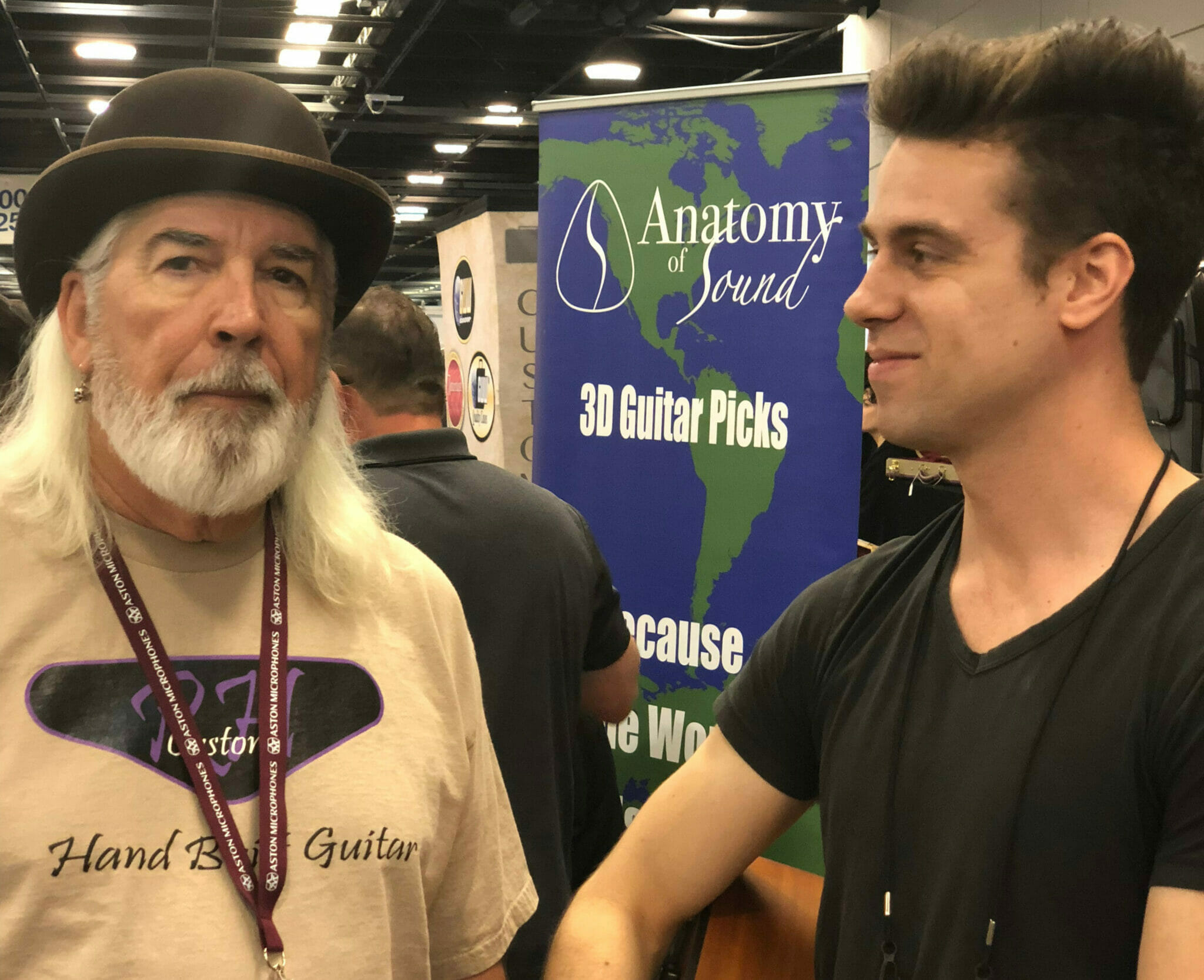 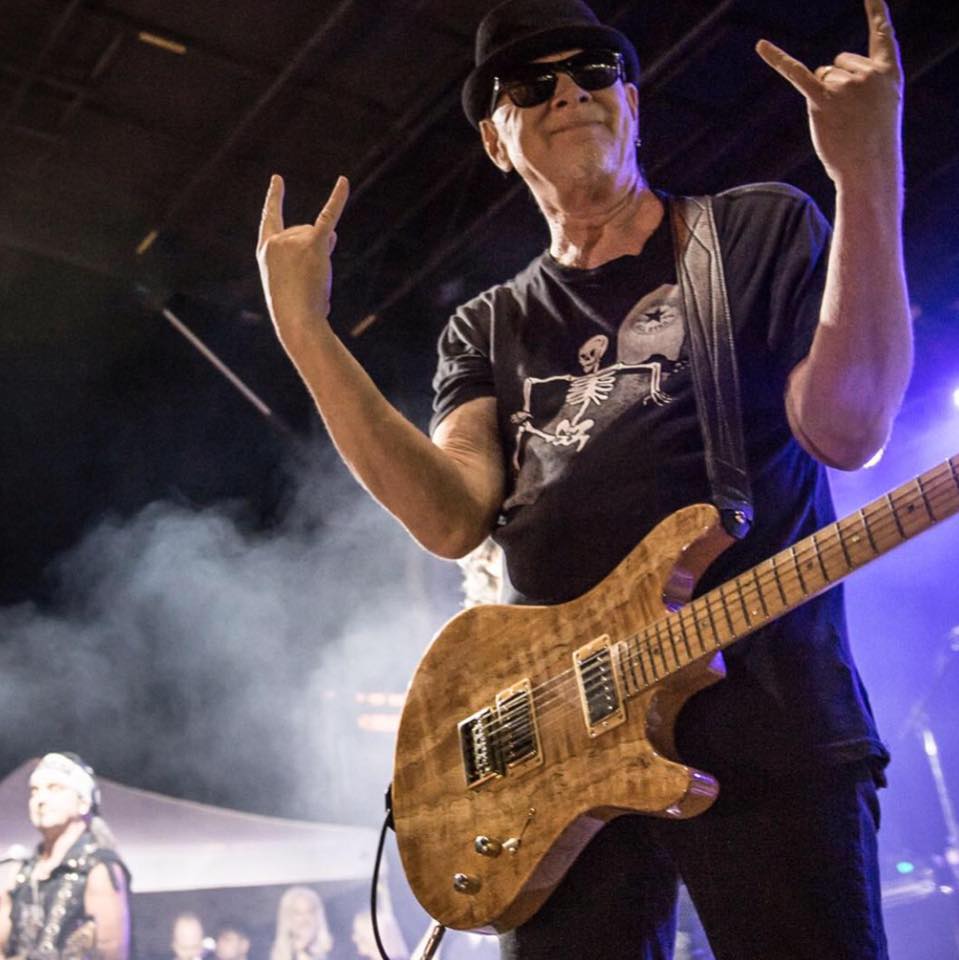 Mark Kendall | ReviewGreat White Guitarist
RH Custom Guitars makes some of the finest handbuilt guitars I've ever played! Attention to detail, great action, sound and sustain. All the best attributes of outstanding performance! I am excited about your work! Love the result and cost. Thanks to my friend for the recommendation. 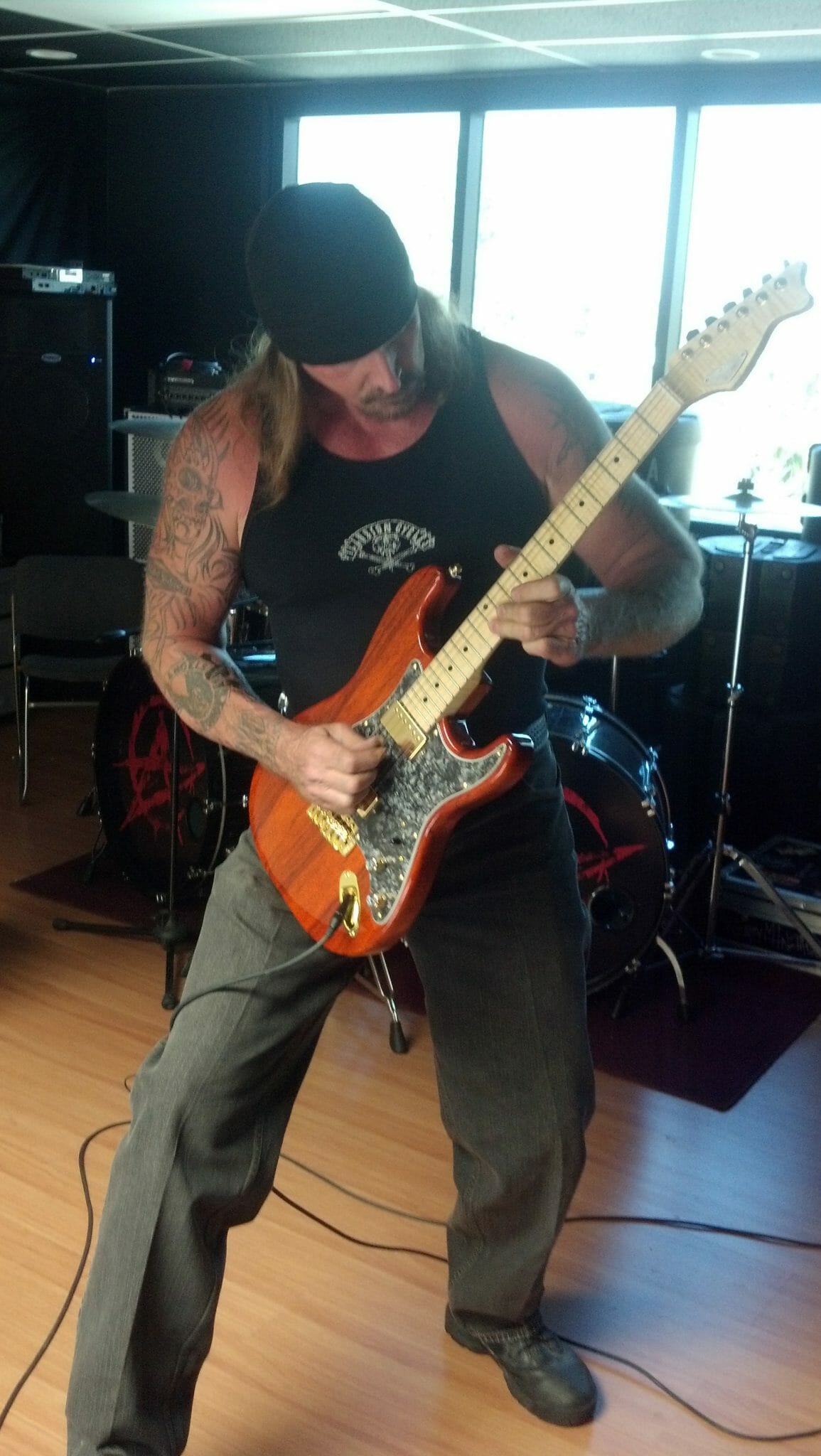 Rusty Coones | TestimonialAttilka 7 Guitarist
I have seen, played, and experienced a lot of guitars and I don't own very many... because a lot are way over-rated, but if you want the ultimate in a Custom Shop Guitar, this is it...and they can prove it!

The craftsmanship and creative design are second to none and the out of box playability is extraordinary beyond words.

The bottom line though is that they feel 'just right' in whatever style you play, and the sound comes through the amps with the warmth and tone compatible to any amplifier. The choice of woods and color tones are 'in tune' and unmatched. Just simply incredible work, feel, tone, and stellar quality in every guitar they build! 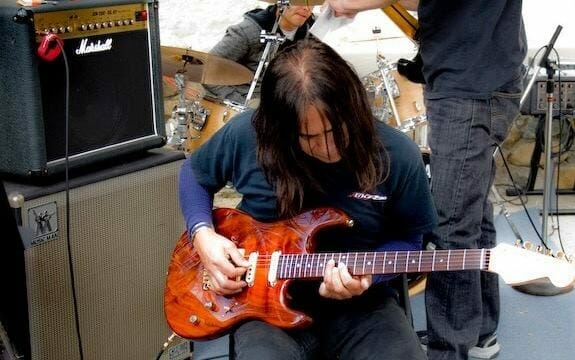 Pete Alva | ReviewMusician & CEO
The main thing I first noticed when I picked up the guitar was the weight. The wood that Rick picks out has mass but not dead water weight, which makes for incredible sustain.

You don't even need to plug this guitar in to judge the sustain. Just play the open G chord and hold it to your body; the vibration goes on for days.

The neck has mass like an old 50's Les Paul, but the 'playability factor' with the flat fretboard makes it silky and fast.

The 'Hum-single-single' combination is a perfect addition to these guitars... very transparent, but very warm and fat. 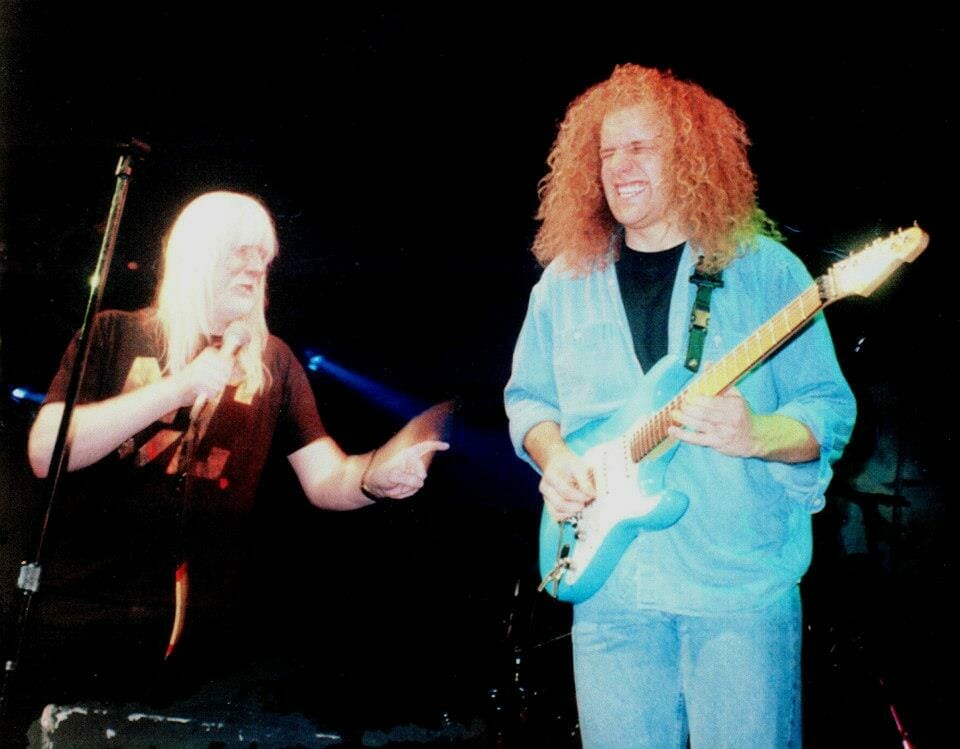 I have just done the Pepsi Challenge with some of my guitars. I played through a Fender Custom Deluxe 64 Reverb with no effects. I played a Fender CS 60 Stratocaster, a Gibson ES-359, my Les Paul and my Gibson 335, and one of my three RH Custom Guitars.

Each of these guitars has its own special sound, but I was able to get all of those sounds put together from my RH Custom guitar.

So, my RH Custom Guitar is, in my opinion, "the best all-around guitar in my ENTIRE collection!" 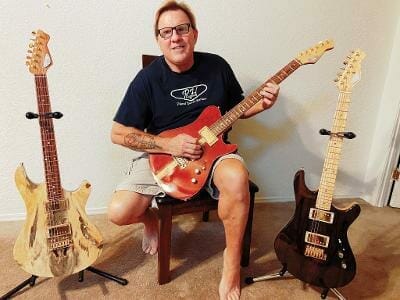 Robert Montee | ReviewRH Custom Guitar Customer
I have two of Rick's guitars. The "Barnyard Boy"... aside from being a work of art... the voicing is clear with exceptional tone.

I commissioned Rick to produce a guitar very similar to Jami Dupuis' and this guitar is not only a beauty but it is a rocking beast.

The RH Custom Guitars are the first to be played and are now my go to axes.

What more can you ask? Visually beautiful and tonally expansive. Thank you Rick. 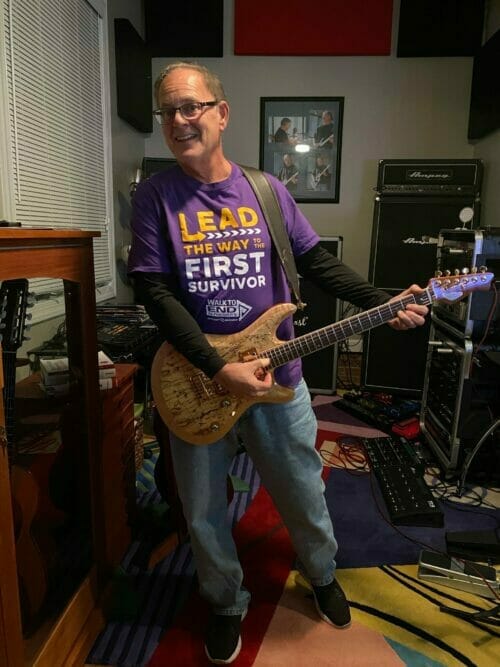 Pete Couture | TestimonialGuitar Collector
I bought the Spalted Maple #13 - and it is amazing! It's not only beautiful, but it plays better than any of my Gibsons and Fenders. I swear it makes me play better. Great fretboard, perfectly set-up.

I took it to Guitar Center to get the strings changed (I was having eye issues), and the tech there took tons of pictures of it. Said he has never seen woodwork that well done! Very happy with my guitar. I look forward to buying another. 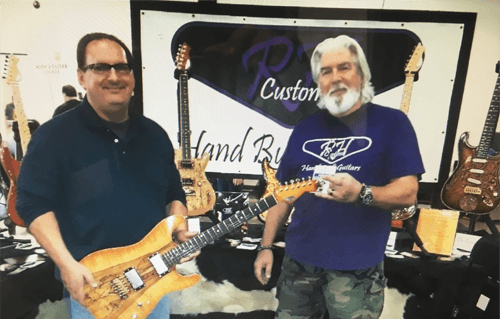 Don Martin | TestimonialSatisfied Customer
The quality of guitar that Rick brings to life is incredible. Not only are the designs mesmerizing, but they play like a dream.

The finish and set-up quality are second to none! The guitar arrives ready-to-rip with no additional tune-up required.

The impossibly low action is smooth and clean across the entire scale with zero fret buzz. The pick-up configuration has a killer range that can cross from mild-to-wild without compromise.

Every aspect of his work shows an attention to detail that cannot exist without passion and a dedication to to quality! 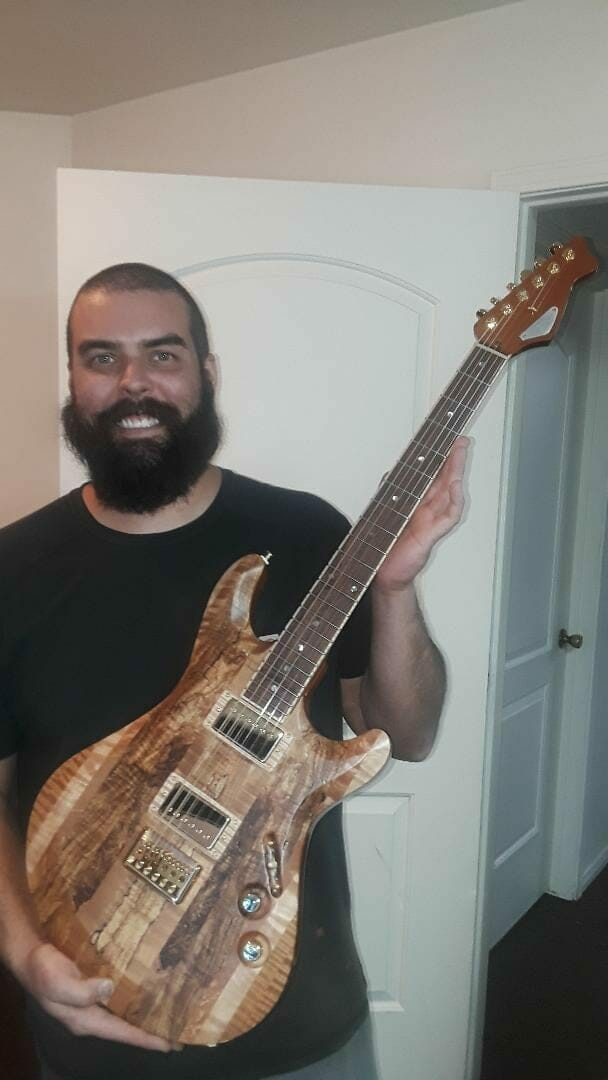 Ryan Perkins | ReviewCustomer
I have the privilege of saying I own the "Paul E" guitar built by Rick. Not only is it a work of art but it plays even better than it looks!

Rick's ability to to craft these magnificent axes is second to none.

This guitar ruined other guitars for me because none play as effortless as my "Paul E" and the pick-ups have an unbelievably versatile range for any genre I play.

If you're looking for a custom high-end player's guitar I'd recommend talking to Rick, you won't regret it. 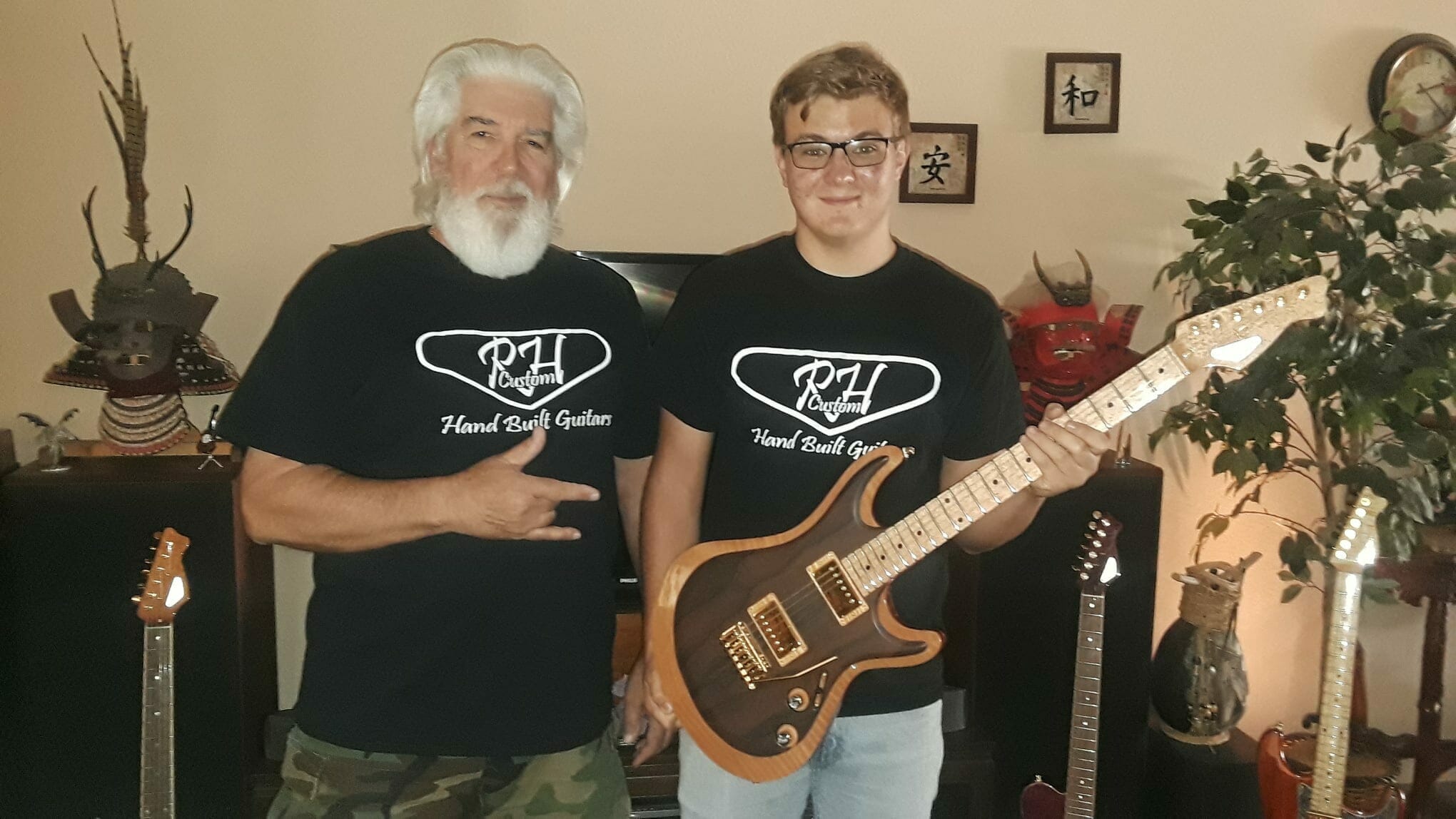 Garret Vakoc | TestimonialProud Owner of the "Paul E" guitar
Thank you Rick for this awesome Ax!
I love my RH Custom Guitar because it does everything I wanted it to do; it is just perfect! 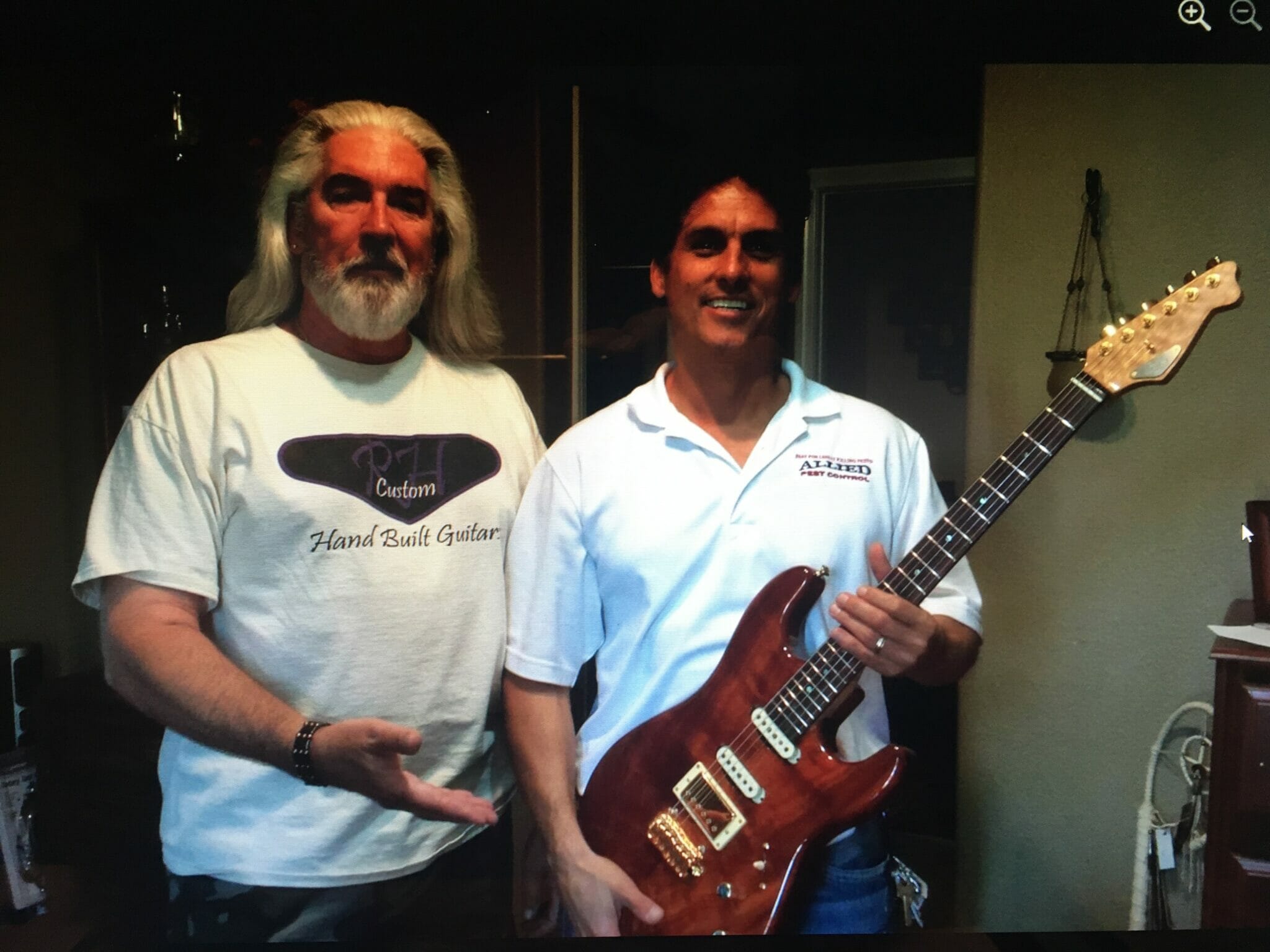